Don’t  animals regularly send us their own special blend of life lessons for us to  reflect upon and put to good use?  Here  are some:

ORANDA. The Oranda Goldfish normally  reaches fifteen centimetres in length. It has been observed that it can reach a  much larger size and that its growth is directly related to the size of the  aquarium in which he lives. The smaller the  aquarium, the smaller the fish remains. However, under favourable conditions,  its growth gets much faster. What a nice parallel with the human mind! When the mind’s space for development is limited,  enthusiasm and vitality are reduced. And when we choose to place it in  an environment conducive to its growth, it starts to open up to more and  different opportunities, reaches surprising proportions and is bound to  discover buried treasures.

TWO FROGS. One day,  two frogs fell down a furrow dug by a tractor wheel. One was swift and one was  clumsy. The swift frog took advantage of its skills and showed off all sorts of  spectacular ways to jump out while the clumsy frog, despite all its good  efforts, just couldn’t manage to escape. Later on that day, the swift frog was  surprised to bump into the clumsy frog once again. "You  have finally managed to jump out of the furrow?” it asked. And the other  replied: "I had no choice, there was a coming and if I did not get out, I  would have been run over!". So, why did it stay in the furrow all long,  since under pressure it succeeded in getting out after all? How many of us  expect to find our motivation from a state of: "I don’t have a choice, I  can’t wait anymore". Why not impose more discipline on ourselves and turn  to action right now? If we are able to do so under pressure, where is the real  difference with right now?

MOHINI. The Washington  Zoo once received a magnificent white tiger named Mohini. For several years,  thousands of people came to admire him as he paced back and forth in his cage  which measured about four meters by four meters. Then one day, the zoo decided  to build Mohini a new space of several acres which reproduced the natural  habitat of the tiger. Once he penetrated  into the new area, Mohini did not start to run wild as expected. Instead he ran  to one corner about the same size as his old cage and began to tread, more and  more each day until the grass was all worn out. And for the rest of his life,  he actually never allowed himself to enjoy the rest of the field. His  ‘psychological cage' was forever drawn to the dimension of four meters by four  meters, and his comfort zone was locked in that small invisible cage. How many  Mohinis are captive inside of us when we satisfy ourselves with things we already  know and feel comfortable to us, often without even being aware? We can escape  those invisible cages whose boundaries are set only by our lack of imagination  or courage.

WAGGING TAILS. You  want a crash course in 'motivating' and ‘enrolling’ other people into your  projects? Then go ahead and use your most enthusiastic voice, and ask your dog  if it wants to go outside for a walk! Inevitably, he will immediately rush to  the door, unconditionally wag his tail and eagerly lick your hands begging you  to hurry up because he will be so happy! You think  humans are sometimes less easy to convince? Certainly,  I agree. However, isn’t Fido the best partner to practice with, allowing us to  imagine all the success we can obtain with others simply through an enthusiastic  attitude?

DEER HIDING. When I  was young, we used to drive two hours every weekend of summer to get to our  cottage located in the countryside. It was  long! One of the things that kept my interest  going was to watch carefully on the sides of the country roads and see a deer  or two. Then one day my mother said something that always stayed in my mind:  "Imagine all the deer we do not see!”.  What a discovery! ... There was not only the  deer we saw, but also the ones that were there and we did not see. This idea took a whole new meaning when one day I  started to realize all the opportunities that were now part of my life: job,  spouse, good friends, business opportunities, etc. And what about the  ones I do not see, even if they sometimes are right in front of me. Just like  the deer... do I think the opportunities that show up in my life are only the  ones I do see? What about those that are hiding behind situations that seem  difficult at first sight, such as a lost job or friend, a financial setback or  even the words of a spouse or friend who is being honest with me, even if his  words hurt me in the moment?

Here are my suggestions:

…and,  most importantly, look carefully among the trees, beautiful deer often hide  there. 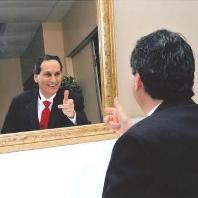